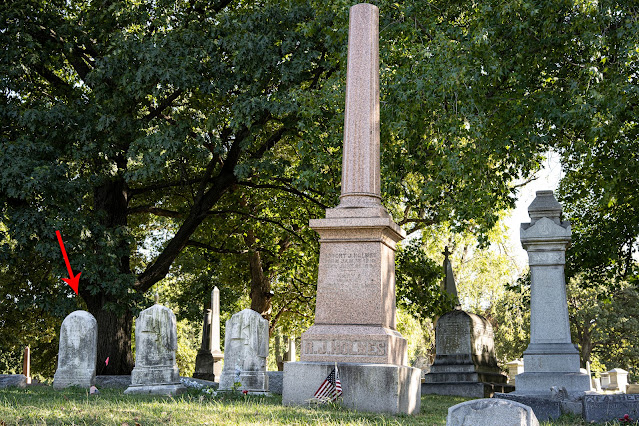 Nancy was born in Jefferson County, Kentucky, in 1780.  She married Jesse Holmes, born 1775, in 1801.  One of their four children was Mary Jane Holmes who married Anderson Shipp Truman. Their son, John Anderson Truman married Martha Ellen Young and their son was Harry S Truman. 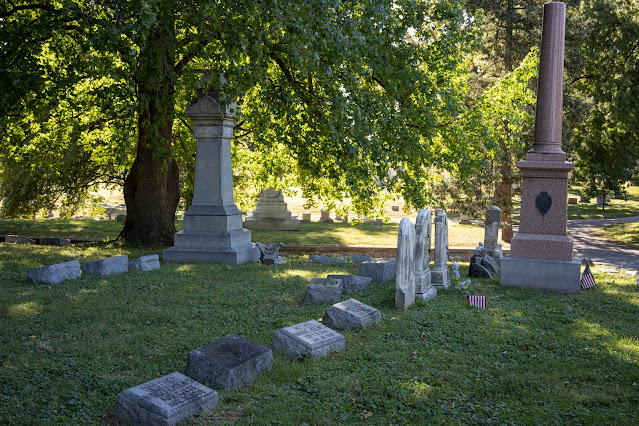 Robert T. Holmes along with his wife Mary were two of the twelve original founders of the First Baptist Church of Kansas City in 1855.
The original stones are almost impossible to read now. 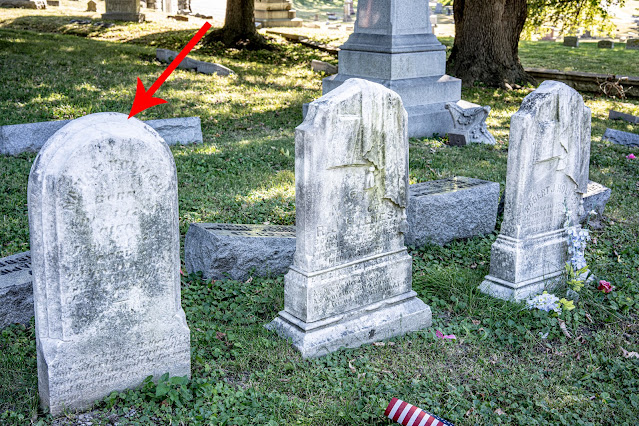 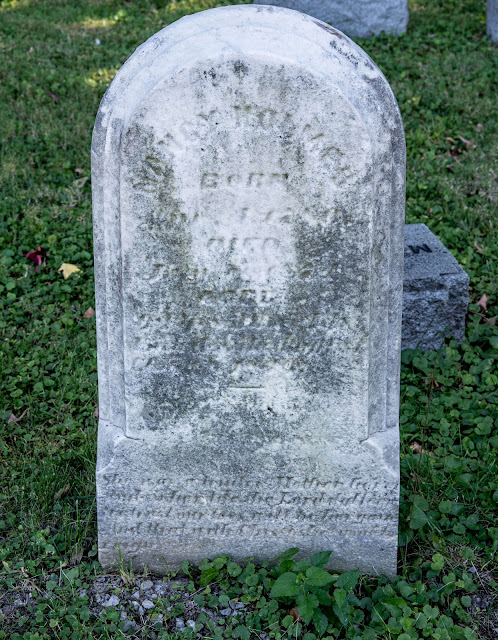 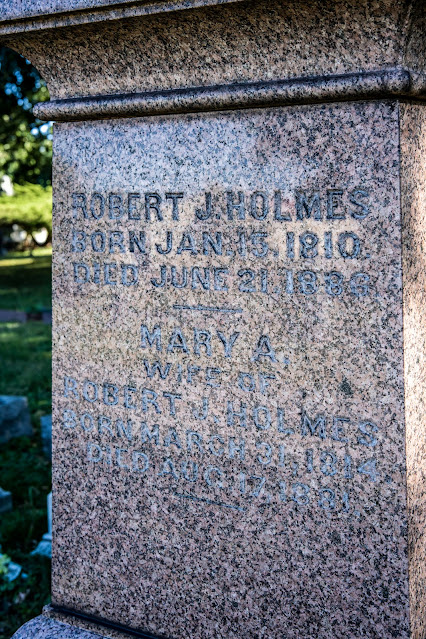 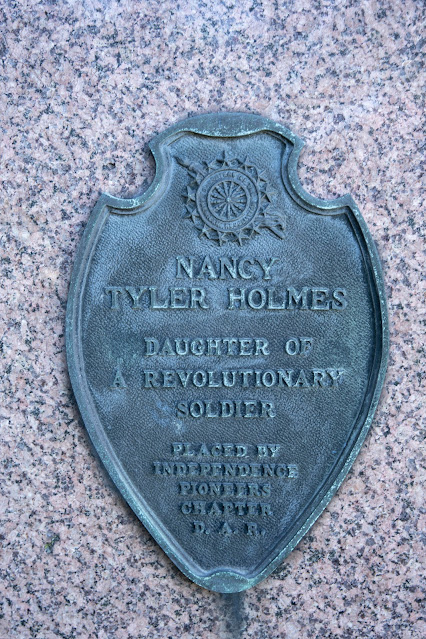 Her father was  Captain Robert Tyler who fought in the Revolutionary War. It was thought for some time that the family was related to President Tyler, but current research says unlikely.  On Friday, June 14th, 1929 Harry and Bess Truman's daughter, Margaret, visited Elmwood and placed flowers upon Nancy's grave in a ceremony by the Daughters of the American Revolution. The above plaque is on the side of the large monument.
.
Nancy Tyler Holmes.
Mary Jane Holmes Truman.                                                          Martha Ellen Young Truman
Posted by Hyperblogal at 6:29 PM No comments: 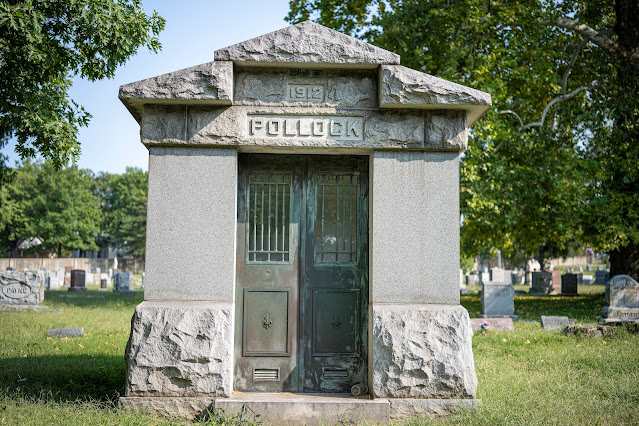 John Calvin Pollock was born in Belmont County, Ohio in 1857.  He was nominated by President Theodore Roosevelt in 1903 to a seat in the Federal Judicial Service, U.S. District Court, District of Kansas .  He was confirmed by the Senate on December 1, 1903.  He served in that position until his death in Jan 1937.    Prior to that appointment he was in private practice in Newton, Iowa, 1884-1885, Hartville , Missouri 1885-1886, Winfield, Kansas 1887-1901 and a Justice of the Supreme Court of Kansas from 1901-1903.   His first wife, Louise Lafferty Pollock died in  1912 which led to the building of the mausoleum above.   His second wife was Beulah Haas McColm Pollock who died in 1955.  Pollock and his first wife had one child Lucille Pollock Jennings. Elmwood Cemetery is celebrating 150 years of existence this coming Saturday, October 1st.   Please come.  For more information use this link: https://www.facebook.com/elmwoodcemkc

Posted by Hyperblogal at 4:56 PM No comments: 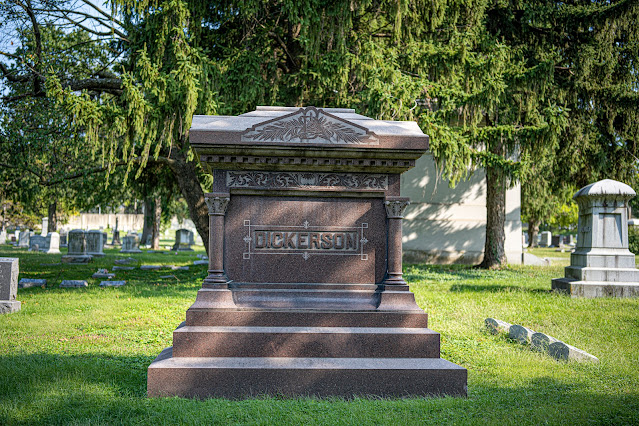 Born in 1835, Dr. Dickerson was one of the best known and wealthiest physicians in early Kansas City history.  When he passed he owned one million dollars worth of real estate in the city and surroundings.He was a physician at Sing Sing prison during the Civil War and later was in charge of all the hospitals of the sixth Army Corps.
His wife Mary Scherrill Dickerson - birthday unknown - came to Kansas City with her husband in 1865. She was called in a profile of the time an "eccentric automobile driver and the owner of the most expensive automobile in Kansas City" in a 1901 profile.  The couple lived in a home at 1120 Wyandotte Street until they built a large stone mansion ( now gone ) on the northwest corner of Armour Boulevard and Main Street.  D'Estaing died in 1902, Mary in 1909.

Just one week from today is the 150th Anniversary of Elmwood Cemetery.  Find out more about the celebration here:  https://www.facebook.com/elmwoodcemkc

Posted by Hyperblogal at 10:02 AM No comments:

Hundreds of children are buried in Elmwood Cemetery in fact the very first burial was infant Sallie Ayers on July 5, 1872.  Jennie Fay was 11 years old when she passed.   This is her story.... as much as I have been able to find.  To lose a life so young is sad, to not be remembered is sadder.
Jennie Fay Rutherford was born on October 6th, 1885 probably here in Kansas City. No birth certificate exists for her but that was not particularly uncommon for the time. Her first home was at 3710 Roberts here in Northeast Kansas City living with her father Samuel L. Rutherford born 1843 in New Jersey moved to Macpherson, Kansas and her Mother Olinda born in 1855 in Ohio who met Samuel in Macpherson. Samuel may have apprenticed carpentry with Olinda's father and soon they moved to the house on Roberts with Samuel's brother-in-law and his family. (Picture below of the house... which, for once, is still standing.)
Jennie had one older sister Arkalena who was born in 1881, possibly in MacPherson. She was called "Lena" for short.
The families moved to 3225 Smart ( still standing, picture below) also in Northeast. Jennie probably attended Scarritt Elementary School which opened in 1891. It's just three blocks from her house.
Sometime toward the end of October, 1896, Jennie came down with the croup. Her physician, Dr. S. R. Stofer undoubtedly visited the home. His residence was not far away in the 400 Block of Indiana.
Croup, today, is very treatable and almost never fatal. Not so in the 19th century. Jennie's croup advanced to membraneous croup which is a very serious version of the disease that causes constriction of the membranes that line the lungs and windpipes.
I imagine that Jennie's bedroom was with her sister upstairs in the back... her parent's room nearby. Her uncle and aunt and cousins probably shared another room on the same floor. Everyone would have been aware of Jennie's illness and doing what they could to help.
Things never got better and she died on Halloween, October 31st, 1896... Jennie had just celebrated her 11th birthday on the 6th.
Jennie's funeral was held in the Smart home the next day. D.W. Newcomer's handled the details. The procession probably went up Smart to Benton continuing on to 15th Street and left to the Elmwood Cemetery entrance.
There is a chapel there now, built by the Armours in the early part of the next century. A beautiful stone church. Jennie's stone faces the road that runs by the Chapel.
Both her parents are buried in Elmwood too. Samuel died in March of 1926, but has no headstone. When he died he was living at 508 Wabash. Tragedy didn't end with Jennie for the family. Her mother was eventually committed to State Hospital No. 2 in St. Joseph where she died in 1911. Olinda does have a stone. (pictured below) Ironically, none of the family members are together.
Lena married William Andlauer president of the Andlauer film company which produced both shorts and feature length movies... some especially for the black community and one which featured Jack Johnson the boxer. William died in 1953. Lena survived him into the mid 1960s she and William had no children. Lena and Billy are both buried in Mount Moriah Cemetery.
The house on Roberts.
The house on Smart where Jennie passed away. The funeral was held here.
Jennie's death notice.
Jennie's mother's grave also in Elmwood.
Posted by Hyperblogal at 1:13 AM 5 comments: 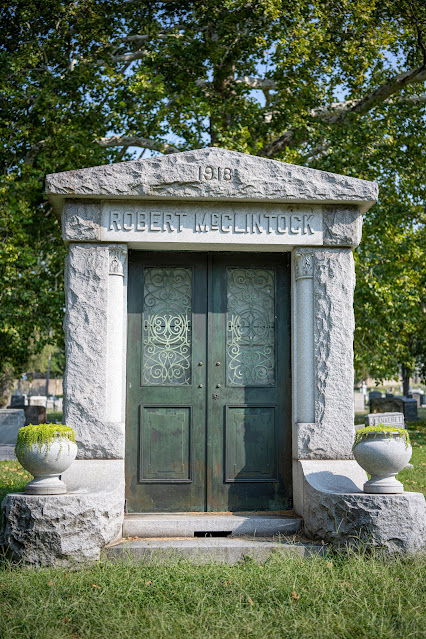 Back in the early 1900s McClintocks Restaurant at 12th and Walnut was THE place to dine.  An early description of the place told of "white and gold ceiling studded with 400 light globes, the white walls dazzled with heavy mirrors and rose shaded candelabras, there was a French chef and an "attempt" at air-conditioning."   Robert, born in 1849, came to KC by steamboat from St. Louis in 1865.  He worked for a mercantile firm for 11 years then started a bakery at 119 E 4th Street where he lived.  In 1891 he started a small restaurant at 1006 Main, followed by restaurants at 921 Walnut, and 1125-27 Walnut.  His son Robert S. McClintock operated an eating spot at 816 Walnut.    Then McClintocks Restaurant at 12th and Walnut was established with multiple rooms for dining.   Robert died in 1917 and his son took over the restaurant...however he found that the $30,000 profit from the place was the same as what he could get by leasing the space out.... so that was the end.      Mr. McClintock was married in 1875 to Miss Mary Sharp of Warrensburg.  She is interred in the tomb with him.   They had two children:  Robert S.  and Mary Agnes.    Remember, Elmwood Cemetery is celebrating its 150th Anniversary on Oct 1... use this link to find out more:  https://www.facebook.com/elmwoodcemkc

Posted by Hyperblogal at 12:32 PM No comments: 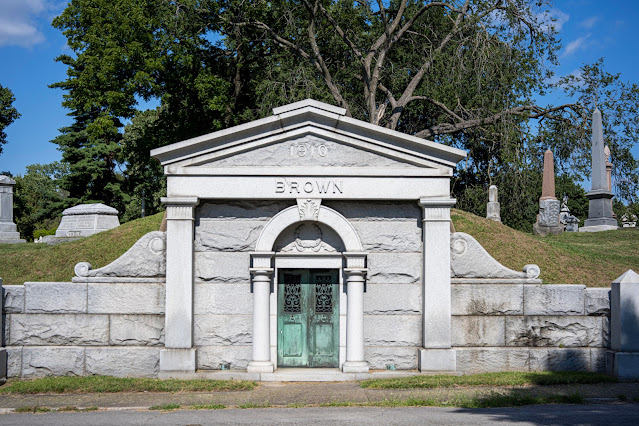 With such a grand mausoleum I expected to find all kinds of information about Mr. George Brown. But there is almost nothing that I can locate.  He was born in New York in 1837 and died in Jackson County in 1910. He, apparently, is the only burial in the tomb.   He was a civil war veteran having served in the First Battle of Independence on August 11, 1862.  It was a rout of the Union Army by the Confederates who outnumbered their forces two to one.   150 of the Union Forces survived and were paroled then mustered out.  George Brown was one of them.   It is said that he served under Colonel Kersey Coates, but I could not confirm that. 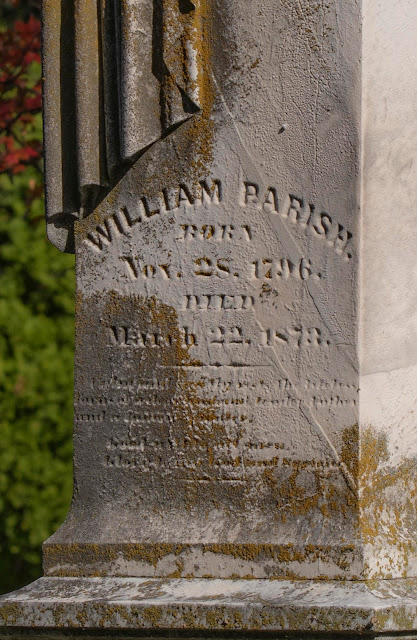 Likewise, William A. Parish has little information available about him.  His is one of the older burials in the Cemetery, 1873.  He was born in 1796 in Kentucky.  His wife was Elizabeth G. Parish and she was born in 1805 and died in 1871.  The truly sad thing about the Parrish's - and fairly common at the time - was half of their six children preceded them in death.   William, Henry, and Missouri Parrish all passed away... Margaret, Eliza Jane, and Angelina all survived their parents.   It's a very nice stone. 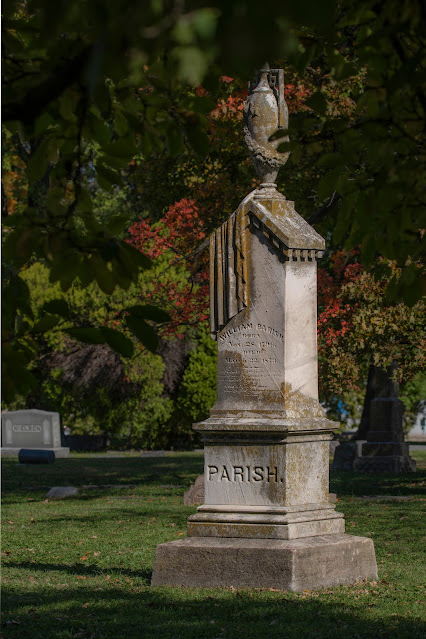 Elmwood Cemetery is celebrating its 150th Anniversary on October 1st.   Use this link to find out more information:   https://www.facebook.com/elmwoodcemkc

Posted by Hyperblogal at 9:44 AM No comments: 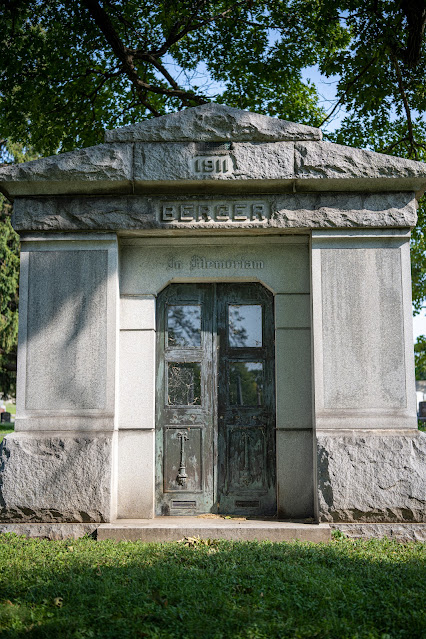 This mausoleum was for the Berger family in 1911 after Albert and his Wife Estella lost their only daughter Cecelia Marie in 1910.  She was the first to be interred there.  She was just 15 years old.

Mr Berger's mother, Cecelia Anne Adams was a graduate of Monticello College her roommate being Julia Dent who married General Ulysses S. Grant.  She was a descendent of John Quincy Adams.  Albert came to Kansas City, Kansas in 1886 to practice law.  He was treasurer and a member of the Shawnee Mission Rural High School Board.  He lived in Mission Hills. His wife Estella Hecker Berger died in 1950.  In addition to Cecelia Marie they had one son Homer H. 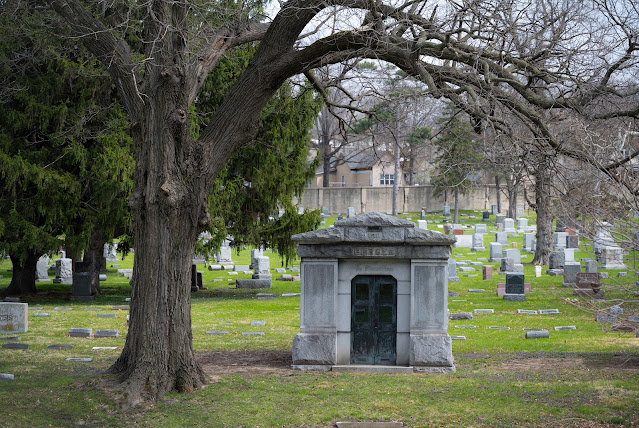 Elmwood Cemetery is celebrating its 150th Birthday on October 1st this Fall.  Use this link to find out more details.: https://www.facebook.com/elmwoodcemkcThe mausoleum has a beautiful stained glass window, above and below.  Below, the stained glass can be seen in the upper right window of the door. 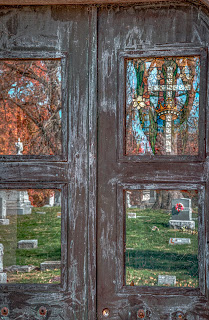